Security is probably one of the most important aspects to running a business or even hosting a valuable business such as an ecommerce website. When our data is under attack, our reputation, appearance and even ability to fully function as a profit making company is under severe pressure. This is what happens when a DDoS Attack takes place.

What is a DDoS Attack? DDoS meaning

A DDoS Attack or a Distributed Denial of Service Attack is a type of attack that pauses or entirely stops users from accessing your website’s pages. During these types of attacks, visitors will be unaware that you are experiencing a DDoS Attack and simply assume that your website does not function properly; leaving them with a bad impression of your site.

DDoS Attacks aim at tarnishing your reputation as a brand, and do this by overloading the system and giving your users a hard time to access the pages they intend to on your website, if allowing them access at all. Users are usually met with very slow loading times, website crashes or irresponsive behaviour in general.

This happens because the nature of a DDoS Attack is to send multiple requests to the server, exceeding the capability limits; causing crashes that could last days or weeks, depending on the severity of the target. 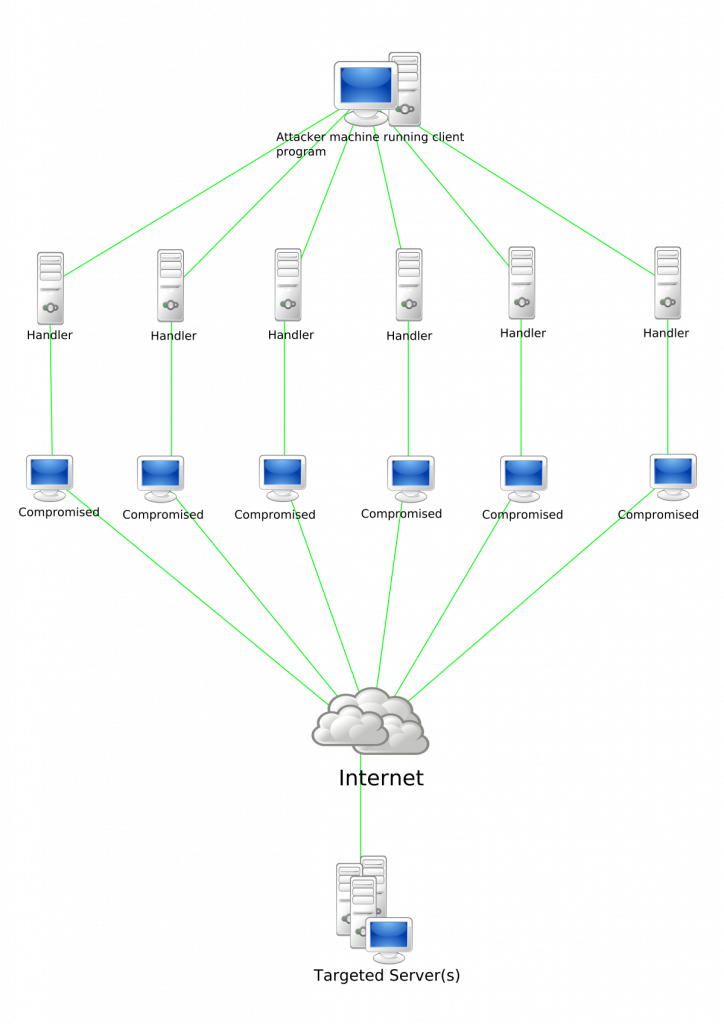 What industries are targeted by DDoS Attacks?

It’s clear to say that no business is safe from a DDoS Attack, but in general ecommerce websites would be affected the worst in this scenario. The purpose of an ecommerce website is to generate profit through online sales, therefore with crashes and limited access to functional pages, users will not be able to finalise their transactions, hurting the company’s ROI in the long run.

But businesses that are on hackers’ radar are usually the bigger companies and industries that stand to lose as much as $20,000 an hour. Such companies include:

Who would initiate a DDoS Attack?

DDoS Attacks are pretty simple to launch if you understand the complexities of the online coding world. And since most high calibre companies are equipped with high ranking employees whose expertise in technological interpretations are pretty stellar, this sort of communication is as simple as the alphabet for the common man.

What we’re getting to with this is that a DDoS Attack is simple to launch, often goes unnoticed for a few hours or days and can be an easy target for competitors to instigate. Perhaps this is not the most common form of DDoS Attack, but when it’s not the hackers looking for some sort of financial gain from a company, it is generally a means by which competitors string users to their site when the attacked website is down or functioning poorly.

How to protect your company website from a DDoS Attack?

The main purpose of this blog is to give you the inside idea on how to best protect yourself from DDoS Attacks to give your business the security it needs to keep on servicing your users with 100% functionality.

At 4Sight we specialise in bringing you safe and secure solutions to keep your website as user-friendly and accessible as possible. Our expertise in understanding how to best provide our clients with premium online protection is what keeps our techy crew happy, mostly because our clients are safe from all the troubles and harms that can limit their functionality.

We can protect your company from DDoS Attacks in the following ways:

Look out for warning signs of DDoS Attacks and be sure to get in touch with 4Sight to make sure you’re properly set up and protected.

4Sight Group is a multidisciplinary Group based in Malta and Cyprus with the capacity to provide a plethora of services all related to the IT & Digital sector.

This website uses cookies to improve your experience while you navigate through the website. Out of these, the cookies that are categorized as necessary are stored on your browser as they are essential for the working of basic functionalities of the website. We also use third-party cookies that help us analyze and understand how you use this website. These cookies will be stored in your browser only with your consent. You also have the option to opt-out of these cookies. But opting out of some of these cookies may affect your browsing experience.
Necessary Always Enabled
Necessary cookies are absolutely essential for the website to function properly. This category only includes cookies that ensures basic functionalities and security features of the website. These cookies do not store any personal information.
Non-necessary
Any cookies that may not be particularly necessary for the website to function and is used specifically to collect user personal data via analytics, ads, other embedded contents are termed as non-necessary cookies. It is mandatory to procure user consent prior to running these cookies on your website.
SAVE & ACCEPT